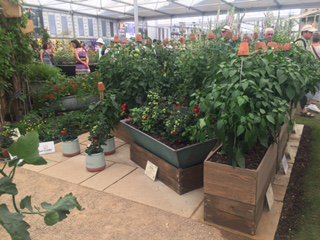 After an enormous amount of hard work from all involved, we made it to the 2017 RHS Chelsea Flower Show, partnered with Pennard Plants, an award-winning nursery based in Somerset, achieving a GOLD medal!

The new varieties that were showcased were ‘Crimson Crush’ a medium sized blight resistant variety with exceptional flavour, ‘Summer Frolic’ an early medium sized tomato with flavour. Then ‘Cherry Baby’ an incredibly flavoursome cherry tomato that just has that ‘pop’ when you taste it, almost like a sweet, one just isn’t enough, they are so good! We were lucky enough for the royal party to taste ‘Cherry Baby’ The Duchess of Cambridge dropped her tomato and applied the ‘five second rule’, on tasting it she have it her royal approval saying it was ‘delicious and sweet’.

‘Patio Plum’, another amazing variety, a compact plant with an unusual leaf was something everyone wanted! We sold out of seed and luckily had some plug plants available for sale. An ideal variety for someone that has only a windowsill or balcony, or for someone new to growing tomatoes, there’s so wires, twine or side shoots to think about.

We also had ‘Popti’ our new prolific sweet pepper, that was in the running for Plant of the year. Cardinal, another sweet pepper which ripens from a very dark purple to red on compact plants. This is a showstopper, at first glance, many of the visitors to the stand thought they were aubergines, never having seen a pepper of this colour before. If the pepper is sliced, it is even more impressive, green on the inside and a colourful skin on the outside.

‘Tangerine Dream’ another sweet pepper, green, ripening to orange. It deceptively looks like a mild chilli pepper, it is in fact a small, sweet pepper with just a hint of spice. This variety lit up the areas in which it stood with its vibrant colour and lush green foliage.

Finally, we had ‘Merlin a medium parthenocarpic cucumber, a seedless variety. There was a lot of interest in this, a perfect size to just have enough to use, some people said they find the whole large cucumbers available in supermarkets just too big and they go off before they use it all.

We loved being part of the show, Burpee’s very first! The exhibit was constantly buzzing with people interested to find out information about our varieties. It was great to meet and talk to so many people from all over the world, the visitors from the USA already knowing Burpee as a household name.